The Trenton Film Society is pleased to launch its first Virtual screening of its annual Trenton Film Festival. Tickets are on sale now. The links below will take you to our virtual festival site on the Eventive platform.

🎟 All-Access Passes cost $28.33, which includes all service fees, and are a great value for film lovers.

Audience members are encouraged to vote for their favorites, and a prize will be awarded to the winning film. For a list of films in competition, scroll down to see a list of all 13 screening blocks.

The Same But Different
(Dir. Art Varga, US, music video, 6min)
In this music video, a young girl learns how small ideas grow into big things.

Go To Hell and Turn Left
(Dir. Carlo Caldana, US, narrative, 1hr 22min)
Reminiscent of Mr. Bean and other silent comics, Olif is a deaf painter struggling with alcohol and the death of his wife Emily. When he sneaks into a reception to play spy for his agent, he sees a woman who bears a striking resemblance to the late Emily.

Transit(ion)
(Dir. Robert Sickels, US, experimental, 8min)
A look at the relationship of movies and their depiction of the human need to travel.

War Game
(Dirs. Mehrnoosh Fetrat & Jon Appel, US/Iran, experimental, 18min)
World Premiere. In an imagined battle between the United States and the fictional Latin American country of Cubachilia, an American soldier has control over water resources and news media on both sides of the war.

Unrepresented
(Dir. Daniel Falconer, US, documentary, 1hr 24min)
This documentary investigates the mechanisms by which special interests bankroll political campaigns and lobby to rig the system in their favor.

High Flying Jade
(Dir. Katherine Sweetman, US, documentary, 21.5min)
The true story of a woman from Los Angeles who moves to Vietnam to join the circus as an aerialist. We meet her one week before the opening night of her first-ever big top performance.

Tuba Ted: The Man and the Music
(Dir. Susan Reetz, US, documentary, 41min)
Spritely octogenarian tuba player Ted Goeden has over 70 years of professional experience, and the stories to prove it.

Behind the Cloud There Lives a Sun
(Dir. Kumar Mayank, India/Philippines, narrative, 15min)
Waiting for a bus to take her son to a family gathering, a victim of domestic violence silently questions her way of life.

Every Shadow Seems Alive
(Dir. Leandro Afonso, Brazil, narrative, 16min)
As a woman leaves her house, she senses threats throughout the day -- at work, on the subway, in the car, on the street.

Coffin Decolleté
(Dir. Nancy Kamal, Egypt, narrative, 6min)
A young girl sees wedding preparations in her home and realizes that she is being forced to be the bride.

The Bartender
(Dir. Travis Newsad, US, narrative, 10min)
Hotel bartender Carly is thrown off her game by the arrival of a VIP guest celebrating with his leadership team. She becomes increasingly concerned for the only woman in the group.

Driving Lessons
(Dir. Marziyeh Riahi, Iran, narrative, 13min)
According to the laws of Iran, Bahareh must have her traditional, chauvinistic husband accompany her to driving lessons so she and her instructor will not be alone.

Seed
(Dir. Joshua Planz, US, experimental, 2min)
Every seed is a poet.

Scenes from the Periphery
(Dir. Derek Taylor, US, experimental, 3min)
An aerial survey becomes a search for home, place, and direction.

I See in the Dark
(Dir. Lana Bregar, Slovenia, documentary, 16min)
An intimate journey into the worlds of three individuals who have lost their sight.

The Man Who Dwelt Below
(Dir. Abram Hammer, US, narrative, 7.5min)
A hermit living underground in a series of wet, grimy tunnels hears a girl’s song and is faced with the opportunity to help someone in need – and come out of the darkness.

As the First Time
(Dir. Emanuela Mascherini, Italy, narrative, 20min)
Oscar is a photographer who has always captured moments and memories on film, until his wife’s illness threatens to steal all forms of memory.

NOTE: Some of the films in this block contain mature content that may not be appropriate for children.

Tangle
(Dir. Maliheh Gholamzadeh, Iran, animation, 7.5min)
An animated short about people forced to leave their memories and loved ones behind because of war.

Azadeh
(Dir. Mirabbas Khosravinezhad, Iran, narrative, 9.5min)
Azadeh wants to go to the city to visit her father in the hospital, but her mother and brother won’t allow her to go.

I Killed a Person
(Dir. Nima Aghakhani, Iran, narrative, 28min)
Children playing with water guns in the street hit a passerby with water. He falls down and doesn’t seem to respond to anyone who tries to help him.

Better than Neil Armstrong
(Dir. Alireza Ghasemi, Iran, narrative, 20min)
Four kids start their journey to the moon with the mission of finding a mysterious place called The Redland.

City of Shells
(Dir. Sean Hamilton, US, narrative, 34min)
Set in the changing urban landscape of Philadelphia, a woman’s disappearance sets off a series of strange events.

Still
(Dir. Michael Licisyn, US, narrative, 6.5min)
Vanessa is a photojournalist who takes it upon herself to investigate a local disturbance. She quickly finds that there are some things only her camera can see.

The Time in Between the Seconds
(Dir. Mark Clauburg, US, narrative, 26min)
Told in a non-linear narrative, this short film follows a young woman whose recovery from a tragic event leads her to make a selfless decision.

Things Were Better Before
(Dir. Lu Pulici, Italy, music video/animation, 6min)
This animated music video, made entirely using found or recycled materials, is a wake-up call for environmental change before it’s too late.

Girl Culture (English subtitles)
(Dir. Mélanie Brun, France, documentary, 1hr 8min)
A year in the life of 13-year-old girls entering the 8th grade in France. Who are these girls? What do they do, what do they talk about, what do they dream about?

Black Hole
(Dir. Nicholas Ovcharov, Ukraine, narrative, 8min)
An astrophysics professor lectures about a black hole, but doesn’t realize that he will be also be absorbed by it.

Comrade Dov
(Dir. Barak Heymann, Israel, Documentary, 1hr 15min)
Dov Khenin has been called everything from “goddamned communist” to “internal enemy” during his 13-year tenure as a member of the Israeli parliament for the leftist Jewish-Arab party Hadash. This thought-provoking portrait follows a unique politician, while examining the open wounds of contemporary Israeli society.

Geronimo: Circus Trash Monster
(Dir. Colleen Brady, US, documentary, 8.5min)
After moving to Kensington, Philadelphia, Regina uses her aerialist skills to beautify her neighborhood and bring together the community.

Sunday in Cadwalader Park
(Dir. Ilene Dube, US, documentary, 30min)
Trenton’s Cadwalader Park is the last great urban park designed by Frederic Law Olmsted, father of American landscape architecture and designer of Central Park. Hear how the park has taken on a life of its own through the voices of local residents.

Eworth
(Dir. Christopher Romano, US, documentary, 16min)
Fly fishing and tour guiding is a way of life for most Belizeans, and this documentary follows one of the best, Eworth Garbutt.

The Tides That Bind
(Dir. Nick Natalicchio, US, documentary, 22min)
People have been sending messages in bottles for hundreds of years, in search of everything from romance to scientific data. Clint Buffington has found over 90 messages in bottles and has made it a mission to track down the senders.

You Reap What You Sow
(Dir. Jacob Updike, US, animation, 2min)
When 5-year old Thomas is evacuating the city with his mother, he asks her why they have to go.

Luna
(Dir. Virend Shindi, US, narrative, 8.5min)
While filming a commercial for a new artificial intelligence app, Luna, the AI, takes on a mind of her own.

Processing
(Dir. Tommy Butler, US, narrative, 7.5min)
One morning inside the head of a young man on the autism spectrum as he and his older sister try to get through the day.

You Look Great
(Dir. Justin Davis, US, narrative, 26min)
In this dark comedy, Peter struggles with his weight and body image as he tries to gain control.

Ben & Sarah Get a Dog
(Dir. George Westberg, US, animation, 9min)
Sarah becomes focused on the idea of getting a dog. Ben is hesitant because he’s afraid of being replaced as the object of Sarah’s affection.

An eccentric loner is forced into bizarre situations when the antique machine he relies on to create daily agendas begins to turn on him.

1,000 Keys
(The Cryptkeeper Five) (Dir. Anthony Catonese, US, music video, 3min)
A music video about finding a stronghold among friends, away from turmoil at home.

The 3 Me's
(Dir. Simon Daniels, Ireland, spoken word, 2min)
A poem about discovery of self.

Song for Our People
(Dir. Mustapha Khan, US, documentary, 56min)
A group of professional musicians and artists come together in a Brooklyn recording studio to create a powerful new anthem to honor the perseverance of their African-American ancestors and to answer the question, “What have you done with your freedom?”traditional old-time string band music, and inspired a new generation of musicians. 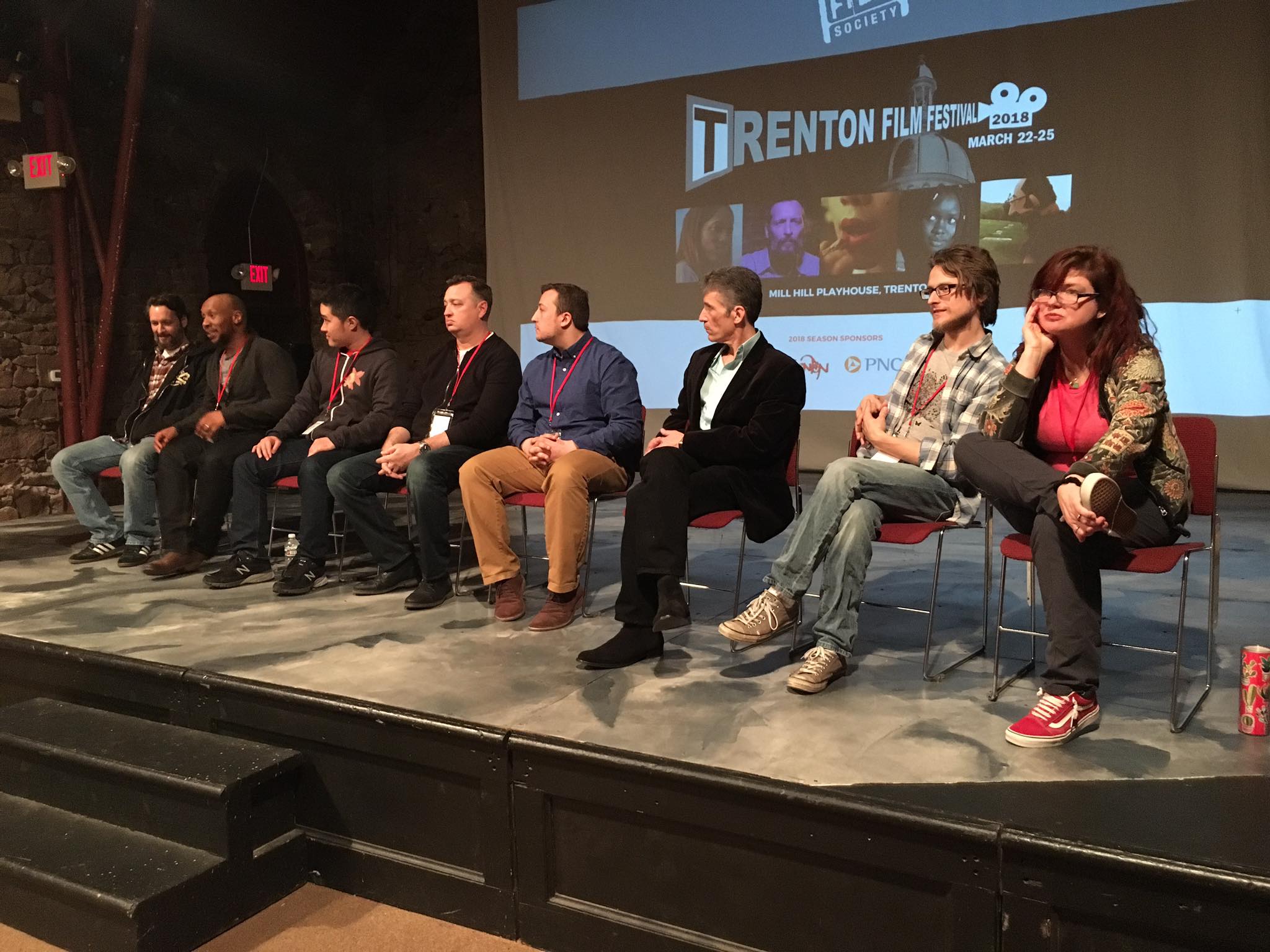 ^ Top of this page